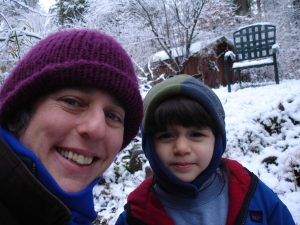 Ingredients for a half height loaf in normal size breadpan. Double this for a full loaf.

Soak buckwheat groats for at least 6 hours. Rinse.
Place drained buckwheat groats into cuisinart with ~1/2 cup of water and ~ 1/2 tsp salt. Blend until smooth batter forms.
Pour the batter into loaf pan lined with parchment paper and cover with clean cloth and place in a warm place (70°+F).
Let the batter ferment for 12-24 hours — until you that the batter has risen and small bubbles have formed and it smells like sourdough! If you don’t see that, let it ferment a bit longer.
Note: If you let it rise in a bowl instead, now’s the time to transfer to a lined loaf pan. Use a wooden spoot and do not mix it up too much.

Bake it for ~1 hour at 350°F. Let the bread be in the oven while it warms up. Count the hour from when the oven has reached the right temperature. It should be just beginning to get brown on top and will be moist inside. If it is gluey moist, let it cook longer.
When it looks and smells done, remove it from the oven and pop out the bread from the pan to let it cool.

Some optional combinations for flavoring:

Tips on this fermented buckwheat bread:

Stores well in freezer!
Should you like more sour taste, ferment the batter for longer.