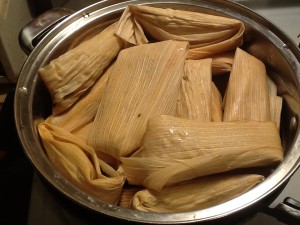 Most people make tamales with masa harina flour, and while you can buy it organic (if you hunt), I don’t know how much it is fermented, so I thought I’d try doing it myself, from scratch.

Especially if you are eating a lot of corn, it is critical to nixtalize it first. This is a process where you soak it in lime (the chemical, not the fruit) or lye. This recipe is different from most, because it calls for diluting the lime first, before the soak, instead of just rinsing endlessly afterwards.

Start at least 1 day and up to 10 days before you are going to cook with:

Use an enamel-coated or stainless steel pot (because the lime will react to cast iron and aluminum) to boil 5 quarts of filtered water. As soon as it boils, take it off the heat and stir in the lime with a wooden spoon. Stir until it is entirely dissolved. Cover the pot and let it cool and settle for 5 hours. Some recipes just say to put lime in a jar, shake well, and then let it settle, before pouring off the clear water to use (no heating involved).

After 5 hours the water will be almost clear, but there will be a thin layer of lime caked on the surface, and more precipitate on the bottom. Place a fine mesh strainer over a larger pot (7 quarts is good) and slowly pour the lime water into the large pot, catching the caked lime in the strainer. Stop before the precipitate leaves the first pot. A cup or two of liquid may be too cloudy at the bottom. Just leave that. If a bit of powder falls into the new pot, that’s ok too. You can also use a ladle to scoop out the clear water, if you need to. Save the leftover water (usually a cup or two) with the white powder (lime) at the bottom. You can reuse it almost indefinitely! Just label it carefully (as it can look like milk!) and put it in the cupboard. More info here: http://thenourishingcook.com/how-to-make-lime-water-for-soaking-corn/

Rinse your corn in running water, then add to the strained limewater in the 7 quart pot. Cover it and let it sit on the counter for at least 12 hours and up to 10 days. Skim off white “clouds” on the surface of the water about once each day.

Note: If you are reusing your lime: I have used mine perhaps ten times now: I just shake it a few hours before I start the soak, and I do purposefully pour just a smidge of the white precipitate into the corn. The “clouds” that form above the corn are much smaller with pre-used lime, and I think *some* are necessary, otherwise the corn does not have the lovely smell of properly limed kernels.

When you are ready to proceed, there are two options.

Easiest for me is: option 1) Pour the corn (WITH the lime water with most of the lime cloud bubbles skimmed off) into a large stainless steel pot. Bring to a boil, then reduce to a simmer for a few hours. Rinse and test kernels until al dente. Then rinse with cold water for at least a minute. Then soak for at least 5 minutes. Then rinse again.

Alternatively, you do option 2) preheat the oven to 250 degrees F. Place a rack so the large pot will fit in the middle of the oven. Bring the covered limestone with the corn to a boil on high heat. Watch that it does not boil over! As soon as it boils, take it off the heat and put the covered pot in the oven for 2 hours. After 2 hours, take out a few kernels of corn and rinse them in running water and test their firmness. They should be somewhat soft — al dente is good — and not hard. If they are hard, put the pot back in the oven for another 15 minutes. When they are cooked enough, put them in a stainless or enamel colander and rinse with cold water for at least a minute. Then soak for at least 5 minutes. Then rinse again.

You now have HOMINY! But we’re not done.

If you want to stop now, you can dehydrate the hominy kernals. They will get rock hard and store for ages. When you want to use them just soak them to get them soft. I have had great success heating them up in a medium amount of water (a bit more than to cover) on the stove, then proceeding directly with doughmaking per below.

To make tamales, you’ll want to make masa dough. 4 cups of dried corn should yield about 7 cups of cooked kernals. Shake dry (in the colander) and put about 2 cups at a time into a cuisinart and pulse until coursely ground.

To each batch of 2 cups of cooked corn, add:
1 tablespoon ghee or lard or tallow or butter (or a bit more)
1 tablespoon bone broth or liquid from cooking the meat (see below)
1 clove garlic (or more if you like it spicy)
1 teaspoon salt
1/4 teaspoon chili powder
1/2 teaspoon paprika

Pulse in cuisinart until the dough clumps together nicely.

Transfer to a large bowl and process remaining batches of corn. Mix all dough in large bowl. If you are not going to make tamales yet, you can put the dough in airtight container in the fridge or freezer.

CRITICAL NOTE: This masa dough tastes amazing just like this! I often warm it with beans and vegies and just eat it like that. I like to freeze several jars of it and thaw as needed for this. Shocking Admission: I eat a lot more this way that in tamales!

But if you are going to make the tamales now, you’ll want to have already started cooking the meat.

Most people use shredded port and make “carnitas” for the tamale filling, but I tend to use hamburger. Other options are beans, mashed/chunky sweet potatoes, and mushrooms, though probably not all together!

If any foam comes to the surface, just skim it off. Reduce heat to low, and let mixture simmer. You will need to simmer the meat for approximately 60 – 90 minutes, Keep enough liquid in pot so it isn’t dry. Don’t boil it madly. Just simmer it until it is done!

Keep the liquid for the dough, or make a soup from it! The meat mixture you will use should not have liquid in it. You can shred any solid meat with 2 forks or a food processor fitted with the plastic “dough” blade.

Crock Pot/Slow Cooker Method: Cook on low heat for 8 to 10 hours or on high heat for 4 hours. Once the meat is tender, remove from slow cooker and let cool slightly before pulling apart with a fork.

When the meat is done and the dough is ready, pull out some corn husks (they should soak in warm water for about 30 minutes, squeeze them drier) and you are ready to make tamales! Oh — one note about corn husks! Be sure to get a brand without preservatives! Some have sulphites! Also note that they can mold quickly (at least in the moist Pacific Northwest) even *with* the nasty preservatives. El Guapo brand does not appear to have preservatives.

Depending on the size of each husk, get a chunk of dough and squish it to about 1/8 inch thin in a rectangle in the middle of the husk. Add a tablespoonish of meat to the middle, and pull/fold the tamale closed. (You can look up how to do this elsewhere.)

Place wrapped tamale in steamer over pot with enough water to steam for about 2 hours. Any leftovers can be placed in plastic bags in freezer and resteamed (20 minutes) to eat later.

Depending on the size of your corn husks, this makes about 60 tamales, give or take. A hungry person can happily eat four. Salsa is very good on them!

This recipe is concocted from several sources, but mostly: Molly Chester & Sandy Schrecengost’s “Back to Butter” book (for the Hominy preparation) and this web page. I also referred to Cheeseslave.com for information about nixtalization, though I did not do it this way.