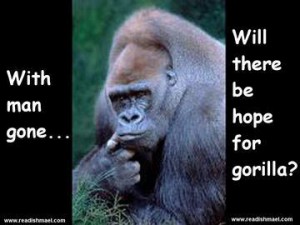 This community began with a village metaphor: It takes a village. But then we read “Ishmael” and “My Ishmael” and other books by Daniel Quinn, and he uses the word tribe to describe the basic human community, a community where we are each known, and accepted, where we are valued for who we are, where we are secure and ourselves. This is what we are looking for, aspiring to, becoming.

It isn’t an easy or obvious thing. Indeed, our culture, the dominant world culture today, is structurally and adamantly opposed to our reorganization into supportive tribes or villages. We have a lot of “programming” to unlearn.

This movie is an EXCELLENT place to start: “What a Way to Go: Life at the end of Empire” produced by Sally Erickson and Timothy Scott Bennett.
View Full Movie on YouTube

Here’s a few quotes I typed out before I found the transcript:

Television viewing for children and I think to some degree for adults is a training for more hyperactive lifestyles and hyperactive informational systems and that is putting people into a kind of emotional, psychological state which makes it impossible to relate to Nature.

Most of us don’t have a human community where we can rest and feel safe and feel like “I’m going to be taken care of.”

There are SO many amazing authors, artists and other people in this movie, it is tempting to turn it into a year’s worth of reading and discussions! Maybe we shall! Here’s a partial, clickable list:

Derrick Jensen: an American author and environmental activist living in Crescent City, California. Jensen has published several books questioning and critiquing contemporary society and its values, including A Language Older Than Words, The Culture of Make Believe, and Endgame. Derrick Jensen has a website with a fabulous reading list and he also has a weekly radio show on Resistance Radio.

Charles Eisenstein, a truly visionary thinker. His works are available for whatevery you feel called to pay (or not pay) online, as well as in print. Amazing stuff. Truly.

Richard Heinberg: an American journalist and educator who has written extensively on ecological issues, including oil depletion. He is the author of nine books, including The Party’s Over: Oil, War, and the Fate of Industrial Societies (2003)

Richard Manning: an award-winning environmental author and journalist, with particular interest in the history and future of the American prairie, agriculture and poverty.

Jerry Mander: an American activist and author, best known for his 1977 book, Four Arguments for the Elimination of Television.

Daniel Quinn: is best known as the author of Ishmael, the novel that in 1991 won the Turner Tomorrow Fellowship…Ishmael has been in print continuously since its publication in 1992 and has been made available in more than 25 languages. Daniel Quinn also maintains a website.

Chellis Glendinning: is a European-American author of creative nonfiction, licensed psychotherapist, and political activist. She is noted as a pioneer in the field of ecopsychology, a proponent of land-based culture, and a critic of technological society, having worked with such contemporaries as Jerry Mander, Vandana Shiva, Helena Norberg-Hodge, and Kirkpatrick Sale.